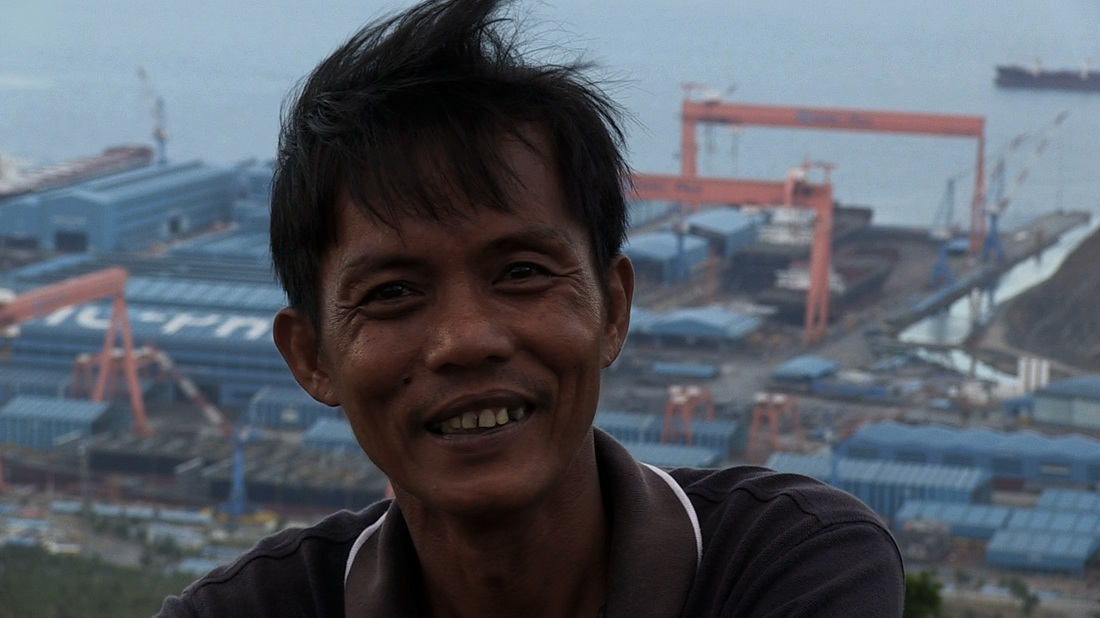 OLONGAPO CITY, Philippines - After seeing his coworkers burn to death while on the job and their bodies disrespectfully removed, Marste of the Samahan ng Manggagawa sa Hanjin (Samahan) was appalled.

"One of the Korean managers entered the scene," recounted Marste, referring to the management members of Hanjin Heavy Industries, Inc, a ship builder in central Luzon.

"He helped in tieing the body up. So when he was about to tighten the holster, he used his foot. That's when I reacted."

Marste had a word with his manager, who later apologized. But disrespect for the dead wasn't the main point.

"There should have been safety officers during work hours," said Marste, whose organization Samahan ng Manggagawa sa Hanjin (Samahan) claims there is only one safety inspector per 280 people.

A Senate probe found that from 2006 to 2009, 32 Hanjin workers had been killed and 5,000 injured. In the first quarter of 2009, the official number of deaths reached 24, a study found, while the Occupational Health and Safety section of the Labor Department reported 40 deaths.

"Aside from the 32 (deaths), there are some undocumented that were kept hidden by the management," said Marste, who suspects there have been as many as 100 workers killed at Hanjin.

According to the a logistics focus group convened by the Philippine Business Leaders Forum (PBLF) in 2008, Hanjin's health and safety crisis was the outcome of putting profit above saftey.

"It seems that Hanjin and its subcontractors are trying to get this quick return of investment by cutting corners, including ignoring requirements on safety procedures at the shipyard and also ignoring requests to implement safety compliance procedures," said the study.

The study, citing Subic Bay Metropolitial Authority (SBMA) Occupational Health and Safety Division findings, claimed that most of the accidents could have been easily avoided "if only shipyard managers imposed common-sense safety measures."

Furthermore, Hanjin passed on safety responsibilities to subcontractors, who in turn had employees sign waivers to assume full responsibility for their own safety.

"This includes the wearing of qualified safety helmets, qualified safety shoes, proper clothes to protect the workers for industrial accident or injury. In short, it seems that this responsibility is being passed back to individual workers who of course have no means to pay for expensive safety equipment," the focus group reported.

The PBLF explicitly blamed Hanjin's sub-contracting policy for the safety hazzards, citing the death of a worker from KC Tech, a Hanjin contractor hired through another contractor, Suschicor.

"Who takes care of the qualification of the workers if nobody controls the chain of subcontractors which employ the workers?," the PBLF asked.

Samahan reported that Hanjin was releasing burial funds of around 85,000P to families of the fallen workers only after signing documents absolving Hanjin of responsibility.

Samahan has called for the construction of a 300-bed hospital to accomodate injured workers. A small clinic with two part-time doctors and two nurses is available onsite, but the nearest hospital is 45 minutes away.

"That's when I realized, what if those accidents happened me?" said Marste. "My eyes were opened, and I became aware that for those who died, the management doesn't want to give benifits and compensation."

Marste, who joined Samahan after seeing the callous treatment of his fallen coworker's body, claimed that some of the union actions, such as a noise barrage during the 2011 safety crisis, produced results.

SAMAHAN reported a spike of eight worker-deaths during the months of March and April, 2011.

Initial attempts to organize a union (HHIC-Phils. Inc. Workers Union or HHICPIWU) were carried out by workers, but despite compliance with requisites, the union registration remained pending due to Hanjin management’s continuous opposition, according to Samahan.

In the first quarter of 2009, workers registered an organization (or Samahan) with the Department of Labor and Employment (DOLE), Region II. In March 2010 the registration was granted, but upon management appeal, immediately revoked.

Through the efforts of supportive Church groups like Urban Missionaries (UM- AMRSP) and the National Secretariat on Social Action, Justice and Peace (CBCP-NASSA JP), the Samahan certificate was reinstated by the Office of National Director of Dole-BLR in September 2010.

Marste himself was first suspended, then terminated, for playing an active role in Samahan.

"The management asked me why I had joined the fight of the union. The management told me that the union would be the cause of the company's fall," said Marste.

Samahan claims a membership of some 7,000 Hanjin workers.

The security office of Hanjin repeatedly put Rappler on hold when being reached asked to comment. - Rappler.com

This is part of the series, Workers find ways: Tara, break muna.