counterpublic.net
I chose images of archives and vinegar-syndrome afflicted film as a metaphor to represent reification and memory loss in my research “Counter/Public: The Politics of Committed Film in the Philippines.”The research focuses on the “new cinema” (the 1970s-1980s) and required conversations with archivists, journalists, actors, editors, filmmakers, and activists. These “social history” accounts were lit and filmed with two cameras, then preserved and published in an interactive database documentary at counterpublic.net.

Art Today
A conversation with Anna Martin at her self-made home in the Santa Cruz mountains.

Under Construction
A site-specific video performance and part of my MFA thesis Negotiating Documentary Space. The author (myself) is in the process of removing part of the gallery wall. In the meanwhile, behind him plays a short documentary video wherein he is interviewing the main players who planned, designed, and built the gallery space itself - except, that is, for the manual laborer who could not be located.  So, the author takes up this position in the built environment; instead of installing the drywall where paintings will be hung, he removes a sheet, in a gesture attempting to peel back the "chain of command" behind the physical space.

Day Labor
“Day Labor” represent its subjects waiting in their respective day-labor sites – individuals, in competition with one another, laboring by waiting. One worker commented to me that it was harder work to wait without finding a job than it was to be physically at work. In “Day Labor,” each worker is paid to wait for the author – and the viewer. We see a series of movements from total alienation and spatial disconnect to more specific, factual statements by the subjects. The viewer, in turn, must share this agonizing waiting with the workers without work...

Day Labor: St. John's
Three parties vie for ownership of one site - a gas station on St. John's. The police, day laborers, and the proprietor of the business alternatively vie for access to the viewer, who acts as a sort of "adjudicator" for this "case."

The Working Homeless
The Working Homeless is a six-channel video installation, a panel discussion, and a media intervention. It consists of interviews with panhandlers who "fly signs" on the I-35 ramps. The project considers panhandling as a form of labor, with wages approximating the minimum wage. It in turn investigates the social, psychological, and economic facets of homelessness. Formally, the video installation consists of six channels set in two rows, as though the space in between were a road. Projectors set on milk crates project video interviews, and sounds of traffic can periodically drown out these interviews. In order that the viewer might catch the entire message, a transcription of each interview is projected onto cardboard signs beneath the project image.

I'm an American
Under the overpasses of Austin Texas, the graffiti is painted over. One man—an American—sleeps next to a pylon near the paint. This is his story. 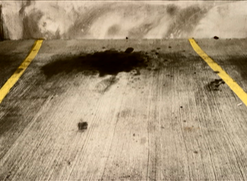 University Avenue
Shot one night on one avenue in Champaign-Urbana. Each location is divided up into stills. Every parking space in a nearby garage has an oil spot in roughly the same location. Set to a metric montage and to a distorted audio track. 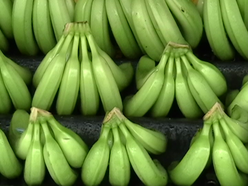 Harvest
A record of my travels in the Midwest and Latin America 2006-2007. Each vignette is on the theme of "harvest."