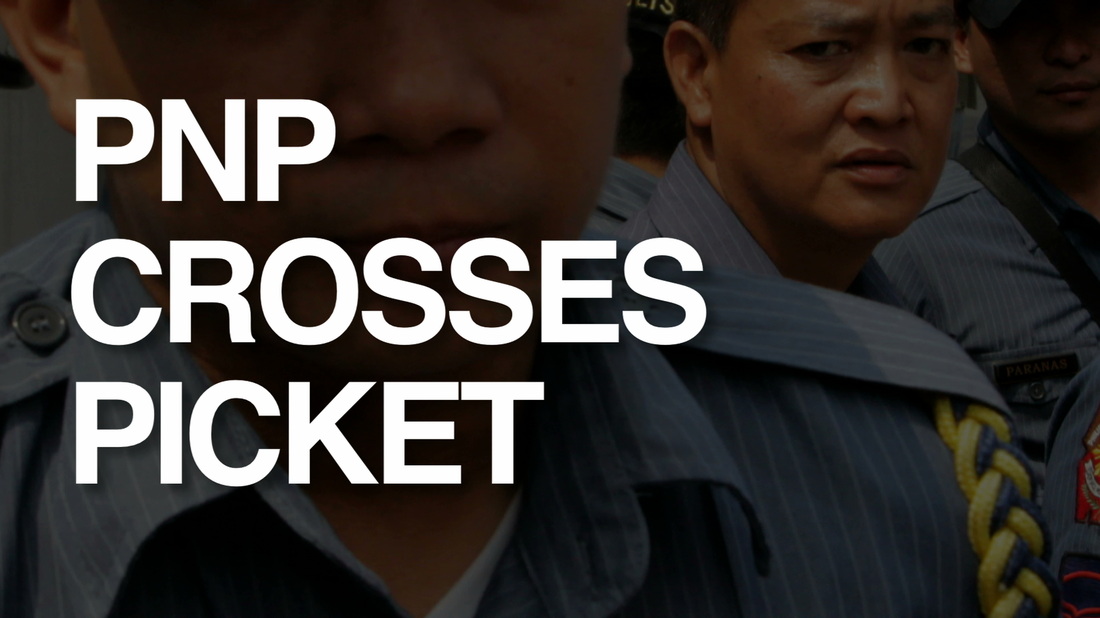 The picket at Pentagon Steel has seen a steady increase both in police involvement and violence.

Earlier this year, a worker was killed attempting to sneak into the factory.

On July 13, several security guards were hurt by a truck exiting the factory and one was alleged to have died.

Currently, an illegal lockout case is pending at the Department of Labor and Employment (DOLE) after being filed by the picketing workers of Pentagon Workers Union (PWU-PTGUO-TUCP), said Joey Dublis, member of the PWU.
Labor violations

Joey Dublis, employed at Pentagon for 19 years, claims the trouble started when 8 workers were given preventative suspensions, while other workers were arbitrarily transferred to different departments. Other allegations include no wage increase, no sick leave, no union leave, and health and safety violations.

Dublis alleges that suspended workers were asked to sign blank, notarized papers as a precondition to returning to work.

The National Council and Mediation Board is offering technical assistance concerning the alleged labor violations, including allegations of police and ununiformed police presence at the picket line and the presence of Special Weapons and Tactics officers and of the military.

Dublis alleges the police were paid by Pentagon to escort vehicles into and out of the factory.

For its part, Pentagon Steel has been given a temporary injunction from DOLE that would allow police to guarantee ingress and egress from the factory. However, according to the Labor Code, DOLE should only be able to issue such an injunction in the case of a strike.

As the Pentagon Steel picketers have clearly been terminated, the picket cannot be considered a strike.

When asked what the police were doing at Pentagon, Quezon City Station 1 personnel stated that "police are there to avoid incident and injury."

Follow-up calls to Station 1 merited this answer: "We have deployed our personnel (including) the PNP, also for security reasons, because of the rallyists - to secure the area, to prevent irregularities within the perimeter."

In both instances, when asked if the statute in the Labor Code limiting police presence to a distance of 50 meters from the strike applied to the Pentagon situation, QC Station 1 personnel fumbled the phone and hung up.

Pentagon Steel could not be reached for comment on allegations of bribery.

It remains unclear how many more lives will be lost to the labor dispute.

Video and editing by Jom Tolento. Produced by Daniel Rudin