Day Labor: St. John's
Three parties vie for ownership of one site - a gas station on St. John's. The police, day laborers, and the proprietor of the business alternatively vie for access to the viewer, who acts as a sort of "adjudicator" for this "case."

Day Labor
“Day Labor” represent its subjects waiting in their respective day-labor sites – individuals, in competition with one another, laboring by waiting. One worker commented to me that it was harder work to wait without finding a job than it was to be physically at work. In “Day Labor,” each worker is paid to wait for the author – and the viewer. We see a series of movements from total alienation and spatial disconnect to more specific, factual statements by the subjects. The viewer, in turn, must share this agonizing waiting with the workers without work...

Proyecto TestimonioThrough the first hand accounts of members of Workers Defense Project, Proyecto Testimonio foregrounds 6 individual histories that open with the hardships of immigration and exploitation, but concludes by revealing the transformative power of community solidarity and collective organizing.

The Working Homeless
The Working Homeless is a combination of six-channel video installation, a panel discussion, and a TV report and media intervention. It consists of interviews with panhandlers who "fly signs" on the I-35 ramps. The project considers panhandling as a form of labor, with wages approximating the minimum wage. It in turn investigates the social, psychological, and economic facets of homelessness. Formally, the video installation consists of six channels set in two rows, as though the space in between were a road. Projectors set on milk crates project video interviews, and sounds of traffic can periodically drown out these interviews. In order that the viewer might catch the entire message, a transcription of each interview is projected onto cardboard signs beneath the project image. 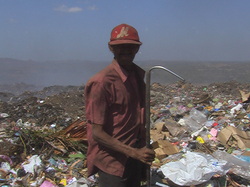 El Fortin
El Fortín visually represents Nicaraguan scavengers, many indigenous. They are enterprising workers, but their work is grueling and dangerous, and the product of war and economic hardship (this hardship, I argue, is an American export). The scars of war must be relatively permanent, even greater the scars of a civil war, the flames fanned by foreign interests. 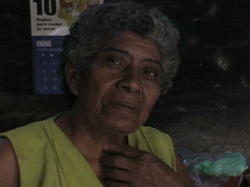 Doña Irma
Doña Irma works 365 days a year making tortillas. In León, Nicaragua, nearly every block has a woman with a micro-business devoted to tortilla making. This ancient, but hazardous informal labor is at once a sacred tradition and a health risk, as plastics are used to start fires and smoke tends to cause skin and lung disease in the long term.